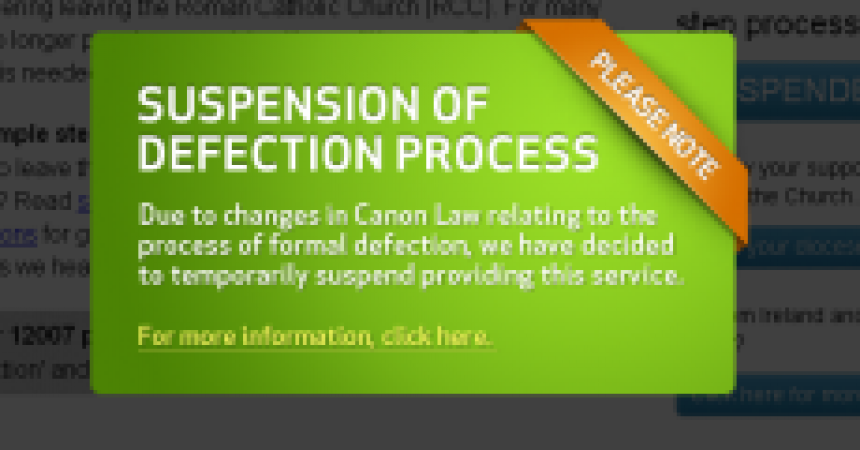 The countmeout.ie campaign which provided a means to formally leave the Catholic Church is to cease operations with immediate effect. The website was established in June 2009, largely as a response to the child abuse scandals, enabling those who no longer felt they were members of the church to formally remove themselves.

The campaign was based on a “Declaration of Defection” which could be downloaded from the website and sent to one’s local parish. The result was an annotation in the baptismal register confirming that the person had defected. In late 2010, countmeout.ie became aware of a change to Canon law which effectively removed this option.

Since this change of Canon law, the campaign has focused on alternative means to formally leave the church. Numerous letters have been written to various church leaders, both in Ireland and in The Vatican, enquiring as to how one can formally leave the church. The church has failed to respond to any of these requests. The Archdiocese of Dublin has proposed to set up a register of those who have expressed a wish to defect but have stipulated that this will have no consequence in Canon law, rendering it effectively meaningless to the Church.

The campaign proved very successful in the early stages and generated a lot of debate. As a group, we felt it was important for people to reflect on their relationship with the church and decide whether they could remain as a member. Countmeout.ie very much regrets having to cease operations. We continue to receive emails regularly from people who wish to leave the church and it is clear that there are large numbers counted as Catholic who no longer regard themselves as adherents to the faith. The failure of the church to allow people to exercise their religious freedom is contrary to the most basic understanding of human rights and religious expression. Furthermore, the church’s decision to ignore repeated requests for clarity and provide alternatives to defection is deeply regrettable.