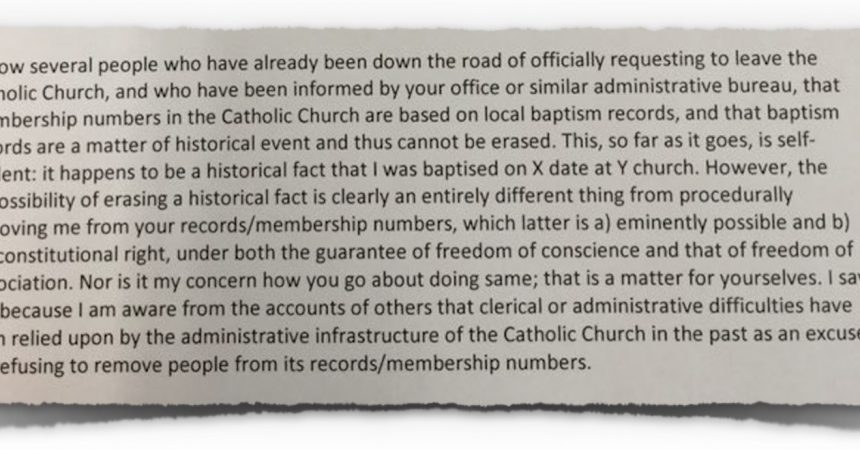 The NotMe.ie service has now registered more than one thousand symbolic defections, almost all from the Roman Catholic Church. In April 2011 the Catholic Church changed Canon Law to removed the option to record formal defections. This decision caused the CountMeOut.ie service to be closed. That service had been established by Cormac Flynn, Paul Dunbar and Grainne O’Sullivan to facilitate formal defections, but the change to Canon Law made this process impossible. Subsequently, the NotMe.ie service was established by Atheist Ireland to allow at least symbolic defections to continue.

In addition to the people who have used the NotMe.ie service, there has been other pressure applied to the Church in this area. For example, barrister Katherine Finn, a member of Atheist Ireland, has pointed out that there is existing case law underpinning the constitutional right of dissociation. Illustrated below is an extract from her recent letter to the Archbishop of Dublin:

The experience of those wishing to leave the Roman Catholic Church appears to be quite different depending on which diocese they were baptised in. For example, some people requesting excommunication have been facilitated by the Diocese of Down and Connor. In contrast, other people who were baptised in the Diocese of Ossory have had quite different experiences. It seems that it remains possible to formally leave the Roman Catholic Church and to have that decision recorded, but some more persistence is now required that was the case before April 2011. It may be useful to:

The CountMeOut.ie campaign was successful in allowing many people to formally leave the Roman Catholic Church. The NotMe.ie campaign has also achieved some success in registering more than 1,000 symbolic defections, and along with other efforts, precipitating the creation of the Register of de facto Defections within the Archdiocese of Dublin. Atheist Ireland will continue to campaign on these issues.